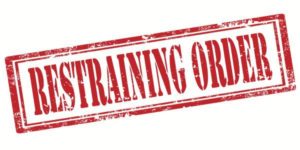 The case of  R v Osman Awan reminds us that if a restraining order is imposed upon you it is not necessarily fixed in stone. It can be altered, especially if the Magistrate or Judge was a bit hasty and, as in this case, failed to exercise some basic common sense.

Mr Osman appealed against the terms of his restraining order which was imposed after he was sentenced for an offence of Harassment.

Although there was a victim impact statement read out at court it seems that the victim was not asked if she wanted a restraining order.

At the time that he was sentenced Mr Osman enjoyed regular contact with the children that he and the victim had together with the help of a third party relative. The court was asked that any restraining order to be made should allow contact via the third party. The judge however decided that the terms of the restraining order was to only allow contact if arrangements were via a solicitor.

Firstly he argued that an indefinite order was wrong in principle and manifestly excessive.

Secondly  he also said that the judge made a mistake by placing a prohibition that severely impeded his ability to have contact. This was because neither he or the victim had a solicitor.

The victim indicated that although she wanted the restraining order to remain she did not have any problem to him having contact with the help of the third party relative.

We think it unfortunate that the decisions as to appropriate terms and duration of the order was made with undue haste. Applying some common sense the Appeal court went on to say:

The appeal succeeded, the order was quashed and replaced with a 5 year order which permitted contact through either of two named parties, with an additional condition not to go within 100 metres of the complainant’s specified home address.

There are two routes to challenging a restraining order. You can either appeal like Mr Osman or apply to vary or discharge the terms.

Using the application to vary or discharge route the law provides that  the prosecutor, the defendant or any other person mentioned in the order may apply to the court which made the order for it to be varied or discharged by a further order.

Using the appeal route you must be careful to get the appeal within the time limits.

Rose & Dunn are specialist criminal defence and motoring law solicitors and higher courts advocates. We can be contacted at any time of day or night. If you need emergency police station assistance contact us using any of the methods below and we will get back to you as soon as possible.